Given the state of the world, I believe we are in the Last Days.  What does that mean?   We are very close to the return of Jesus.  I am serious, I have followed Bible Prophecy since I was a teenager. I have written several blogs on Spirit of Glory about the End-Times. 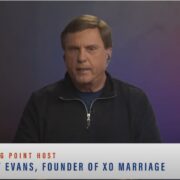 This week on the Tipping Point Show, a very important guest, Bill Salus, joins me. We discuss his book, “Psalm 83 – The Missing Prophecy Revealed”, and discuss the coming Psalm 83 war.

The Bible prophesies there will be nine wars in the end times. Learn which will be a nuclear war, which will be entirely supernatural in nature, which will result in the annihilation of two-thirds of the Jewish people, and more! Dr. David R. Reagan founded Lamb & Lion Ministries on April 1, 1980. Dr. Reagan is a native Texan who resides in a suburb of Dallas.

“I will pour out My Spirit on all flesh”, this is a release from God of the Holy Spirit. The releasing of His Spirit will occur; ”Before the coming of the great and awesome day of the LORD”, just before the Rapture.