Given the state of the world, I believe we are in the Last Days.  What does that mean?   We are very close to the return of Jesus.  I am serious, I have followed Bible Prophecy since I was a teenager. I have written several blogs on Spirit of Glory about the End-Times.

I Saw Prophecy Fulfilled in Israel | Perry Stone. Learn what is coming. Watch the latest Manna-Fest episode with Perry Stone. This episode was filmed in Cleveland, TN. 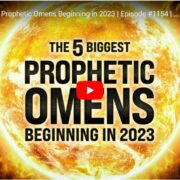 The 5 Biggest Prophetic Omens Beginning in 2023. Watch the latest Manna-Fest episode with Perry Stone. This episode was filmed at the 2022 Main Event Campmeeting in Cleveland, TN.